Elsa (31 yo), Founder of MotherStories

For the past 4 years, Elsa has discovered and told many different and inspiring journeys of mothers in beautiful articles, which she illustrates with gorgeous pictures. But do you really know who is behind that keyboard and camera lens? Who is this mysterious girl? Today we take the opportunity to introduce you to the woman behind MotherStories. She too deserves to be in the spotlight and to share her own story. Discover the exclusive interview of Elsa through Natalie’s eyes.

Elsa, can you introduce yourself in a few words?
I have many different roots, as a typical Genevoise: a dad half Turkish / half Swiss, a mom half Italian / half English. When I was 8, my parents divorced and I lived most of the time with my mother and grandmother who have surely been my greatest inspiration. Thanks to them, I developed, at a very young age, a sense of aesthetics that naturally pushed me to follow an artistic path. At 16, I started the School of Arts-Appliqués in Graphic Design before specializing in Marketing & Communication at SAWI in Lausanne. At 21, I met my husband and found my first job as a graphic designer before getting into advertising as an Art Director. I was lucky enough to work on many exciting projects but, after 6 years at a frantic pace (those who have worked in agencies will understand), the desire to create my own project started to grow until I decided to go for it.

Why MotherStories?
Wanting to become a mother, I was interested in everything that had anything to do with motherhood. I was surprised to see how difficult it was to find answers to my questions despite the multitude of content on the subject that was either poorly written, poorly explained or poorly presented. My feelings were confirmed after a trip to see my best friend who had just given birth in London. There, the spirit of community and mutual help is very strong. Everything is thought out and created for mothers to connect with each other. A very “women’s empowerment” state of mind present in all the Anglo-Saxon countries inspired me and made me want to create it here in Switzerland. From there, the project became clear. I was going to create a community for mothers imagined by mothers who have the common desire to meet, exchange and share their experience of motherhood in a caring way.

How and why did you choose this name for the community?
I wanted to highlight motherhood, it was the starting point. By dint of putting several variations on paper, the simplest one seemed obvious to me: Mothers’ Stories. And, let’s be honest, it sounds better in English vs the French: Histoires de mères (smile).

What is the question you are the most frequently asked?
Why do a project for mothers when you’re not one yourself?

And what is your answer?
That MotherStories is not exclusively dedicated to pregnant women or new mothers. MotherStories is also for women who want to have kids or for those who already have older children and who have different advice to give and experiences to share.

How does it feel to be exposed to so many personal life stories?
I am very touched by all the extraordinary women I have met through the MotherStories adventure. Women who, in all transparency, have had the courage to share a chapter of their intimate lives with us. I am extremely grateful to them for trusting me. Each story is unique, but together they bring other women together, allowing them to identify with each other and to move forward. These stories have a powerful impact on community members and a benefit I would express as therapeutic.

What are your favorite MotherStories moments?
There are many, but I will mention two.

The first one is about Lily, a lovely little girl with very serious cancer, whose wonder-mother Judy I interviewed. We organized a fundraiser to help them with the many costs associated with the treatments. This special day took place at Studio Soham with a brunch and activities for the children. It was wonderful to see so many people gathered for the same cause. We had only one goal: to make a little girl forget her illness for one day. This solidarity touched and marked me enormously. The good news is that Lily is now in complete remission.

The second one is the arrival of Natalie in the MotherStories project. I didn’t think I would be able to delegate and let go of my baby to another person but, after 1 year of collaboration, I can say that it was by far the best decision. It’s not a myth that two people are stronger together. Natalie and I are complementary and this has brought a new vision to the project but above all a new energy. I would like to take this opportunity to thank her and tell her that I love sharing MotherStories’ day to day with her.

Now back to your story: were you and your husband on the same page about having a baby?
In retrospect, I have to admit that at one point we weren’t.

In 2015, I went off my pill very excited at the idea of getting pregnant but 1 year later, still nothing. Worried (by nature), I wanted to investigate the reasons why. This brought the first discrepancy: in the eyes of my husband, we had to let nature take its course and give us time.

I still decide to have my tubes checked for blockages but nothing on this side. The fertility specialist tells me that the next step is a spermogram. This brought the second discrepancy: my husband did not want to hear about it at this time.

Frustration and misunderstanding began to set in on my side. I didn’t understand why he was not as eager as I was to become a parent. He, on the other hand, blamed me for putting too much pressure on us, which resulted in intimate relationships that had become too programmed and mechanical.

We just weren’t ready at the same time and that is key when wanting to conceive.

But that’s not the only reason…
No, indeed (smile). A few months ago I was diagnosed with stage 2 endometriosis and I got a full check-up with a specialist as I was starting to have more and more pain as I approached ovulation and my period. Cramps, permanent low back pain, pain during intercourse but above all I felt very moody ( I had doubts, anxiety, cried a lot…). Being rather enthusiastic and positive by nature, I didn’t understand what was happening to me. The specialist who followed me clearly told me that this was the reason why I hadn’t gotten pregnant until now.

What treatment did he offer you?
To get pregnant today, I would have to go through an insemination or IVF protocol. This would mean continuing to have pain every month until a pregnancy is confirmed. This would result in no more pain (in theory) for the next 9 months because I would be off my period during pregnancy. A few months after giving birth, I could take the pill again continuously in order to fight the pain and prevent the disease from getting worse because, with each new cycle, the endometriosis gets a little worst.

How do you feel about motherhood today?
After years of running after it, I have decided today, not to resign myself, but simply to let things happen naturally. And after accompanying the lives of hundreds of mothers, I’m no longer sure I want a child of my own (laughs). Today I feel fulfilled in my life and in my relationship. I’ve found the right balance that I’m not ready, for the moment, to disrupt. But above all, I appreciate my freedom. A freedom that is accentuated by the fact that I am professionally independent.

What advice would you give to a woman trying to get pregnant?
When it comes to motherhood, everyone has an opinion to give and they’re not shy to share it. The number of times I was told, “Just let it go, it’s going to come”. When I would hear that all I wanted to do was smash that person in the face (laughs). So rather than giving advice, I would say: listen and trust yourself. It’s nothing revolutionary, but it’s the only real advice I could give.

A woman you admire?
My maternal grandmother. A unique, beautiful, generous and resolutely modern woman for her time!

What do you like to do to recharge your batteries alone and as a couple?
Being alone at home (smile). I’m very sociable but I can spend hours at home re-decorating, moving around my furniture and my objects. I’m very homely and love my Home Sweet Home. I feel good and comfortable in my house. Otherwise, I love to read, photography, good food and go for a massage! If I feel a little down, I book 30 minutes of Thai foot or back massage and it gives me a boost! As a couple, I would say that a city break is really the best anti-routine remedy.

What have you learned from MotherStories?
So many things. But above all the human dimension. For 4 years now, I have met fantastic people, whether they are mothers, midwives, gynecologists, teachers, coaches, the list is long. But also the entrepreneurial aspect. I started from scratch, without knowing where or what to start. In 4 years, I learned more than anywhere else. Today, I have a lot more self-confidence and I feel capable of lifting mountains (smile).

What can we wish you today for tomorrow?
That the MotherStories adventure continues! We are currently working on several new projects, including a new service that will be revealed to the lucky ones at the MothersNight on 12.03 at Herstreet (more info here). We’re looking forward to the future of our community. 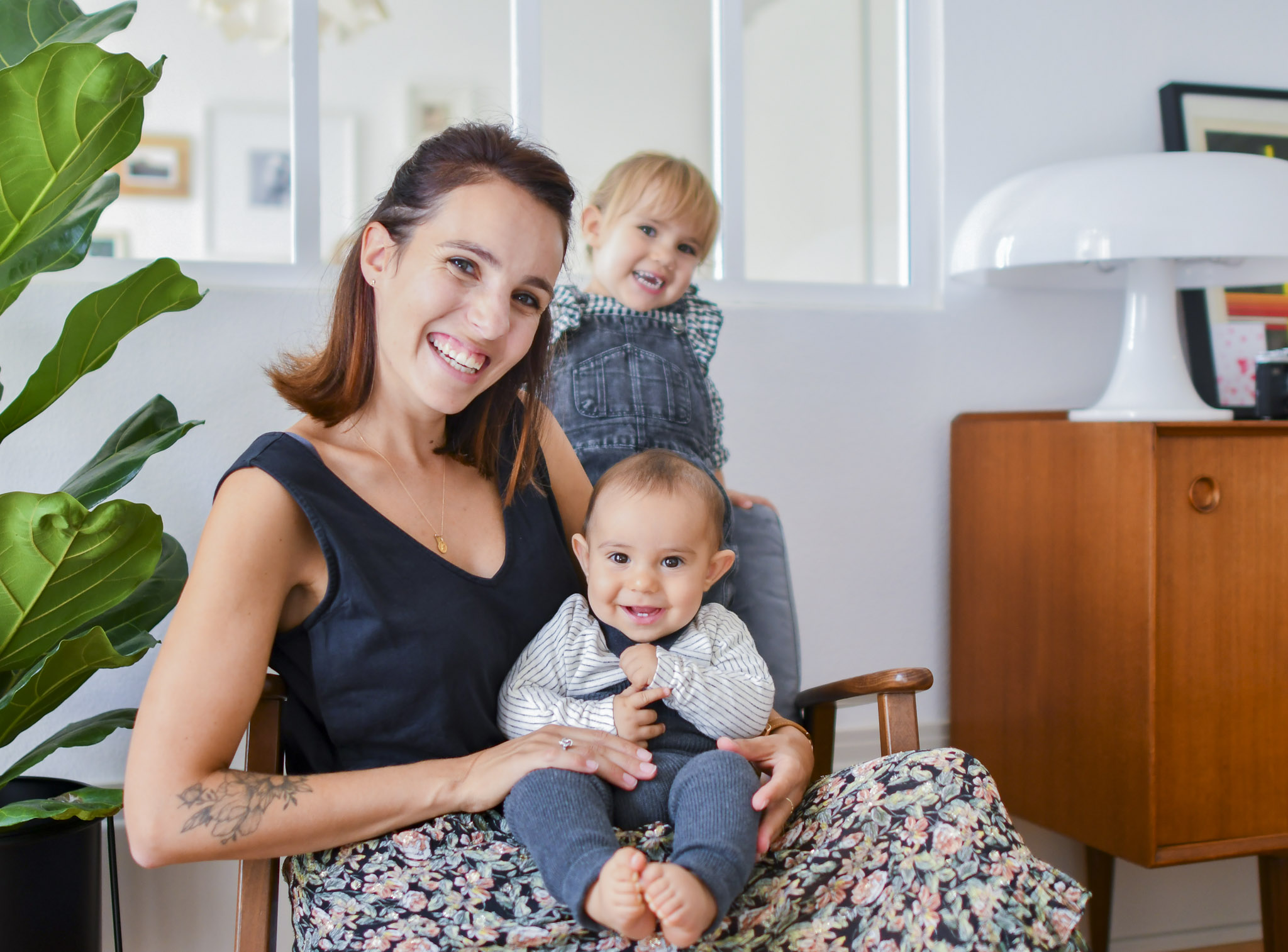